Learning And Enjoying Animals And Plants

Hikers will come across all kinds of plant and animal life, some of which is indigenous to or found only in Japan.

TREES AND OTHER PLANTS

The trees and other plant species that populate the forests of Chubusangaku National Park vary by area and altitude. 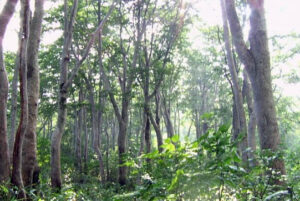 The Japanese beech, or buna, is a deciduous tree native to Japan and can grow at altitudes of up to 1,400 meters. Its ability to absorb and store rainwater in its trunk and roots helps prevent erosion, and the evaporation of water through its leaves acts as a natural cooler and climate modifier. The tree’s leaves turn yellow in autumn. 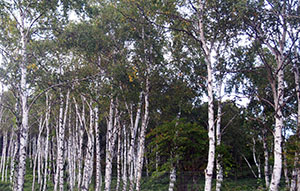 The white birch, or shirakaba, is found throughout the mountains at altitudes of around 1,500 meters and can be recognized by its white, flaky bark and lime-green leaves that turn golden yellow in autumn. 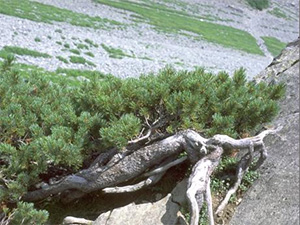 Dense fields of Siberian dwarf pine (haimatsu) can be found at high altitudes near the tree line throughout the park, creating a safe haven for the Japanese rock ptarmigan. 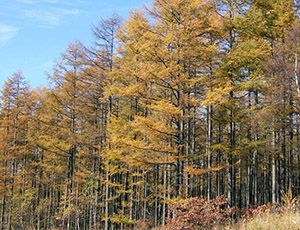 The Japanese larch, or karamatsu, is the only deciduous coniferous tree native to Japan. It comes into leaf early in spring, and its needles turn bright yellow before being shed in autumn. 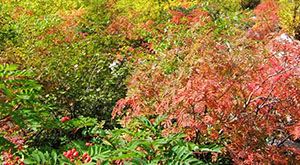 The Japanese rowan’s name, nanakamado, is made of two words meaning “seven” and “oven,” from the belief that it is such a slow-burning firewood it can be used in an oven seven times. Also known as mountain ash, it bears small white flowers in spring, followed by brilliant red berries and leaves in autumn. 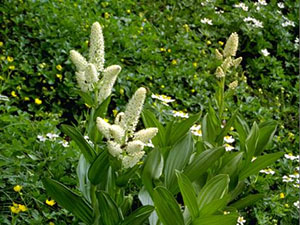 Veratrum, or kobaikeiso, is a toxic flowering plant recognizable by its straight stems with multiple white blossoms. It is found in areas of damp soil and blooms every few years in midsummer. 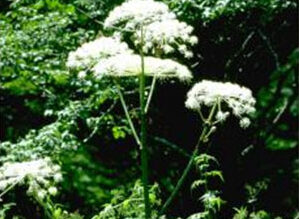 Called shishiudo in Japan, this is a native plant with delicate white blossoms resembling fireworks that emerge from its tall stems in July and August.

Bird watchers will find the park a habitat for migratory and nonmigratory species, including: 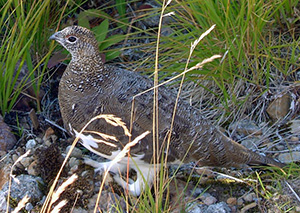 The Japanese rock ptarmigan (Lagopus muta japonica) is the prefectural bird of Gifu and Nagano Prefectures and an iconic species of the Japanese Alps. The Japanese name, raichō, means “thunder bird,” and comes from its tendency to emerge in bad weather when predators are less likely to be present. The birds live on alpine mountaintops and thrive among the Siberian dwarf pines of Mt. Norikura (3,026 m).

Camouflage is a key survival strategy for rock ptarmigans. Their plumage is mottled brown in summer and turns pure white in winter, hiding them from foxes, crows, martens, and other predators. The species is endangered, partly because their populations are limited to high altitudes—mountaintops where deep snows and limited vegetation still mimic the ice-age climate in which the ptarmigans evolved.

The birds are not afraid of humans, and are most active in the hours after sunrise and before sunset. Their favorite habitat is beneath the thick shelter of dwarf pines. One can tell they are near by their calls: a frog-like croaking in the case of a territorial male, a gentle “coo coo” from a female. Their droppings look quite different from those of other birds, resembling the brown, wormlike catkins dropped by pine trees. Brighter-colored droppings are fresh, a sign that a ptarmigan may still be nearby.

If you spot a rock ptarmigan, be sure to watch quietly, stay at least 5 meters away, and leave if you sense it is stressed. Be especially sensitive during the spring mating season. To protect their alpine environment, stay on the clearly marked paths, use designated toilets, do not pick plants, and do not leave garbage, which may attract predators.

Crouching calmly and quietly near ground level will improve your chances of glimpsing this fascinating creature. Ask hotel or bus terminal staff for up-to-date information on where best to search. 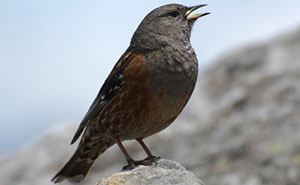 With its streaked brown back, gray head and reddish-brown spotted breast, the alpine accentor (iwahibari in Japanese) is found in mountain areas with little vegetation. It can be found at elevations of over 2,000 meters but usually winters at lower altitudes, and is known for its beautiful song, warbled while in flight. 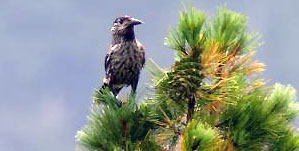 The spotted nutcracker, or hoshi-garasu, is a member of the crow family and feeds on insects, nuts, and pine cones. It is found in coniferous mountain forests and has an excellent memory, remembering hundreds of locations where it has buried food. Its distinct white-spotted pattern is elegant and eye-catching.

The park is home to many creatures great and small, protected through conservation and awareness programs. 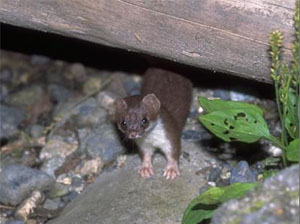 Called okojo in Japanese, this is one of the smaller members of the genus Mustela. While it looks adorable when standing on its hind legs, this furry creature is carnivorous and hunts small mammals and birds, like the rock ptarmigan. 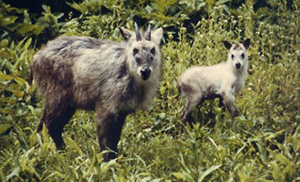 Though its Japanese name, kamoshika, includes shika, which means deer, the Japanese serow is an even-toed bovine, a kind of goat-antelope. While not in danger of extinction, it is considered a symbol of Nagano and Toyama prefectures, and is therefore a protected species. 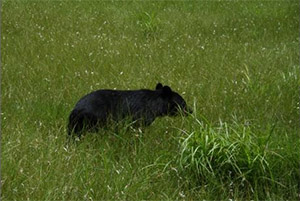 The Asian black bear, or kuma, is medium-sized and largely herbivorous, though it will feed on small mammals, birds, and insects. It sports a distinctive white patch in the shape of a crescent moon on its chest. Adults have an average weight of 135 kilograms but can reach 200 kilograms. 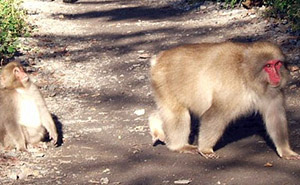 The Japanese macaque or “snow monkey” can be found in many areas of the park, particularly in Kamikochi and at other high altitudes in the Northern Alps. Their diet includes leaves, bamboo shoots, insects, and nuts. Visitors from abroad are often surprised to find monkeys, which are more commonly associated with tropical areas, in such a cold, harsh habitat.