Tons of Onsen to Choose From

A great base from which to explore the national park is Okuhida Onsengo Hot Springs, five cozy communities offering a wide array of hot-spring baths. Nearby, the Shinhotaka ropeway ascends steeply to an observation deck at an elevation of over 2,000 meters, where visitors enjoy spectacular panoramic views of the park’s highest peaks.

Although credit cards are accepted at most hotels, many local cafes and eateries only accept.
ABOUT THE AREA 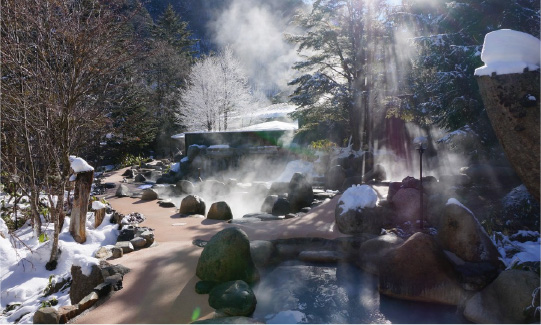 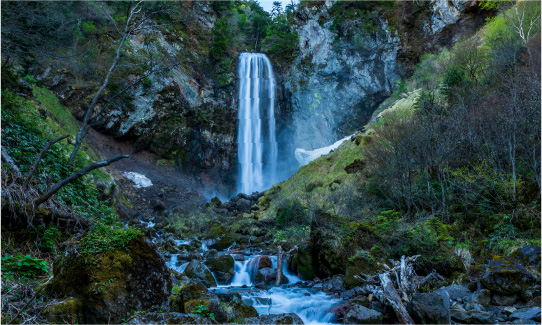 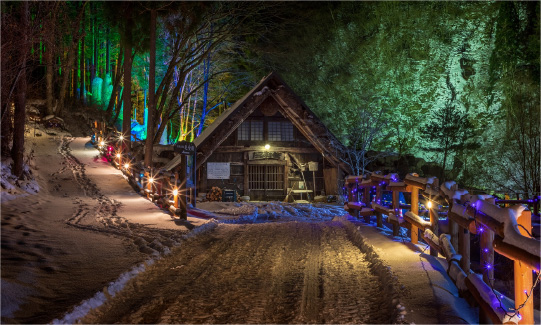 For visitors who want a longer experience of the natural wonders of Chubusangaku National Park, or perhaps just an early start on a mountain trek, there is no better “base camp” than the Okuhida Onsengo Hot Springs. Nestled at the foot of the mountains, it consists of five small hot-spring communities only a few kilometers apart, offering a variety of accommodations and plenty of baths to relax in. Visitors can soothe and recharge tired muscles, and the springs are even believed to heal certain ailments. Together, these villages have more open-air hot springs than any other similar area in Japan. A number of the baths are mixed gender, and bathing suits are permitted in certain cases.

Two of the villages, Hirayu and Shinhotaka, are in the national park itself, and there are three others nearby: Fukuji, Tochio and Shin-Hirayu. Each village has its own character (and distinctive mix of mineral components in its baths), and visitors are welcome to drop in and sample the waters without staying overnight. Overnight guests can choose accommodations from pensions and Western-style hotels to sprawling seventeenth-century traditional buildings. Many rooms have views of the surrounding peaks of the Northern Alps.

Not far from Shinhotaka is the lowest station of the Shinhotaka ropeway, with two sections making an ascent from 1,117 meters to 2,156 meters. The observation deck at the top has some of the finest views of the Northern Alps, a panorama of peaks, many over 3,000 meters high.

Goshikigahara Forest is a flourishing ecosystem that covers over 3,000 hectares on the northwestern slope of Mt. Norikura. At lower elevations, wild plants and trees include deciduous trees such as beech, walnut, and oak, while higher up a variety of conifers, including fir and Japanese hemlock grow. Wildflowers like rhododendrons, magnolias, and monkshood touch the scenery with pink and purple. Many of the plants thrive in the forest despite being threatened elsewhere, thanks to strict policies that limit human impact. 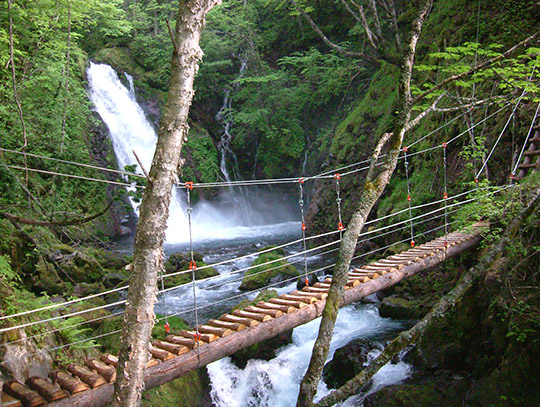 The trails and even the roads leading to the forest are left unpaved to help preserve and protect the area and its wildlife. The number of tours per day is also limited to minimize disturbance to the environment. Five small rest lodges in the forest are equipped with bio-toilets that do not pollute the nearby rivers and streams. Additionally, all trash must be taken away when leaving the park.

Access to the forest is only possible on guided tours in groups of up to 10 people. Tours follow three distinct courses and are spaced out so that hikers’ paths do not cross. The 6.7-kilometer Kamoshika course passes four large waterfalls, crossing the forest from north to south, while the Shirabiso course winds around mountain ponds and streams, leading to a terraced waterfall. The Gosuwara course passes through sections of forest that have remained almost completely untouched, ending at an elevation of 1,920 meters. Each course takes eight hours to hike in full, so tours start early in the morning although half-day tours are also available.

Most of the forest is owned by the city of Takayama, but is maintained in large part with assistance from relevant organizations. In the past, until about a century ago (around 1892–1918), copper and silver mining flourished in the area. It is said that at the height of activities (around 1907), there was a town with as many as 3,000 people, including miners and their families, living in the mountainous area. Following the closure of the mines after World War II, the land was purchased by the city, and the forest was saved from overdevelopment. The hiking courses were developed in response to the rising momentum toward sustainable use of the forest’s rich natural environment, and public tours started in 2004. 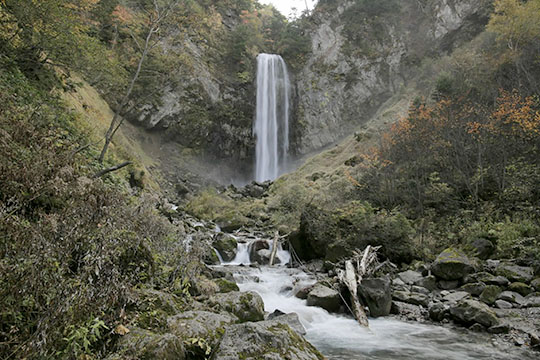 The Great Hirayu waterfall is close to the Hirayu Onsen hot-spring village. The waterfall came into existence tens of thousands of years ago, when lava flowing down from the Yotsudake volcano solidified where it ran onto hard, sedimentary rock and created the two walls of rock from which the falls formed, along with a U-shaped basin.

Local legend says the hot springs of Hirayu Onsen were discovered by soldiers after their invasion of Hida Province (present-day Gifu Prefecture) during Japan’s Warring States period (1467–1568). Exhausted after battle, the soldiers were gazing up at this waterfall when an old white monkey came down from behind the falls and led them to some nearby hot springs, which they used to bathe, rest, and soothe their wounds.

The waterfall measures 64 meters high and 6 meters wide, and was recognized in 1990 as one of the Top 100 Waterfalls of Japan.

The scenery changes with the seasons, from the bright greenery of fresh spring leaves to the brilliant reds and oranges of the fall foliage and the frozen cascade of the waterfall itself in winter.

THINGS TO SEE & DO IN
OKUHIDA ONSENGO HOT SPRINGS