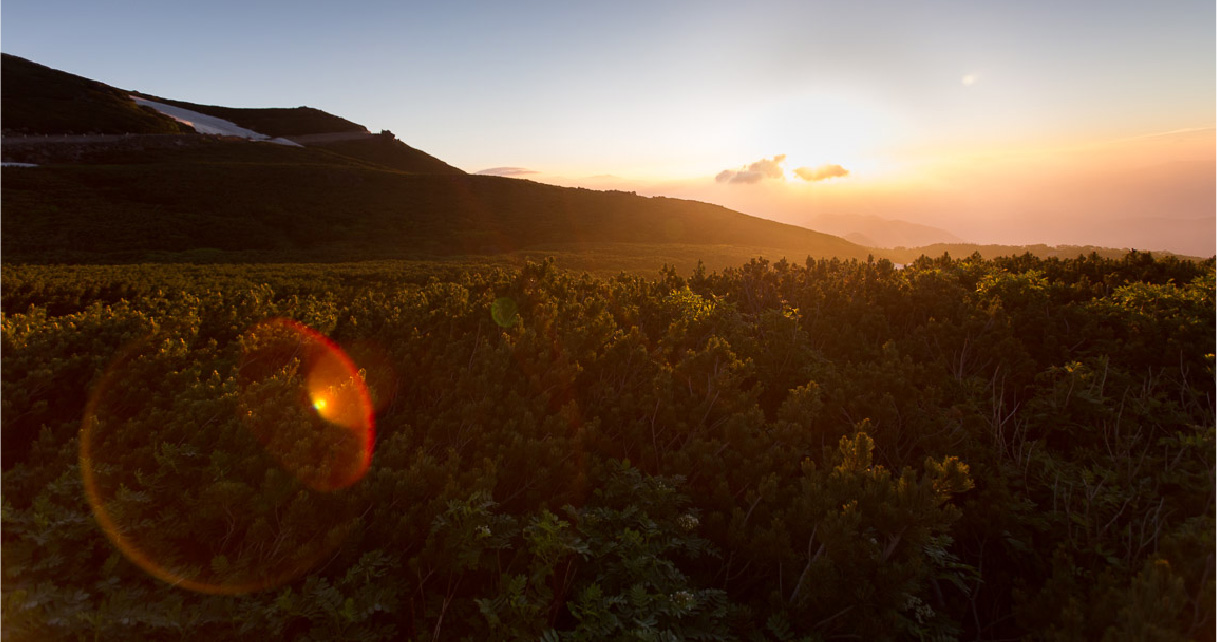 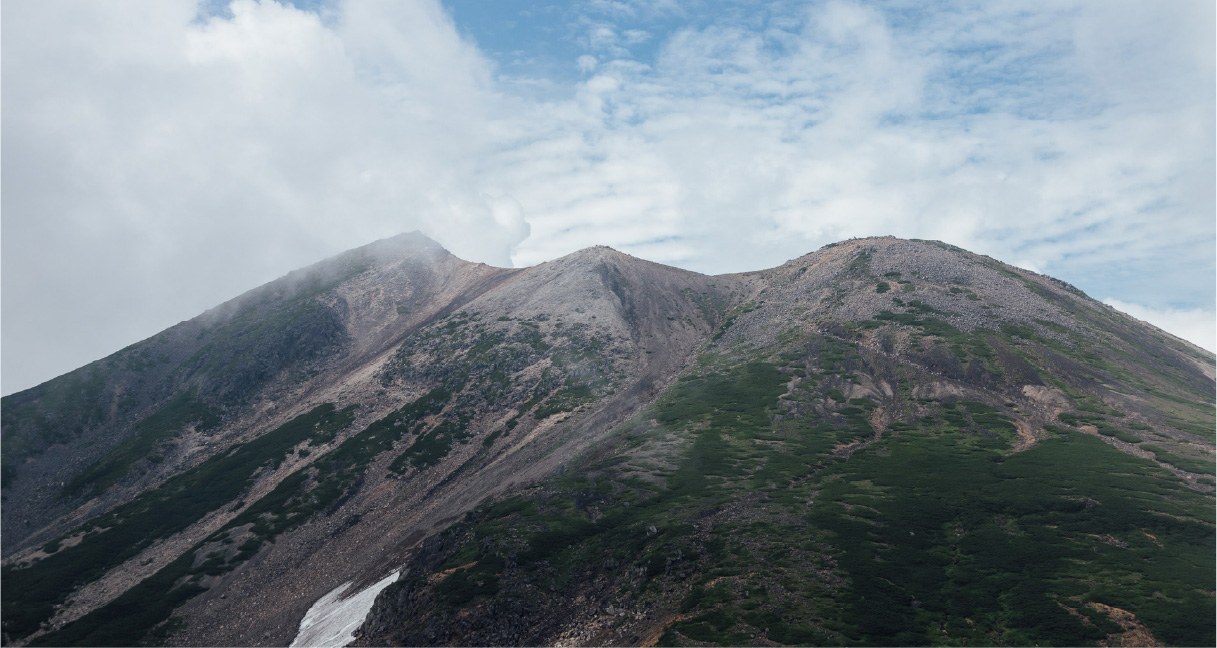 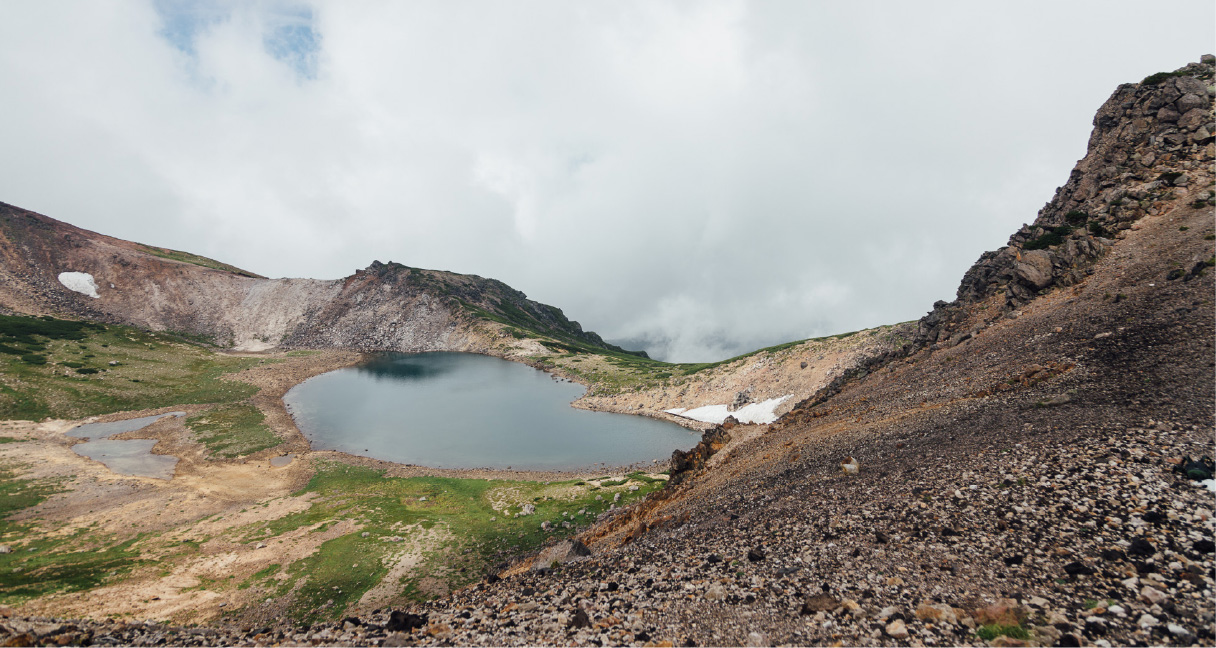 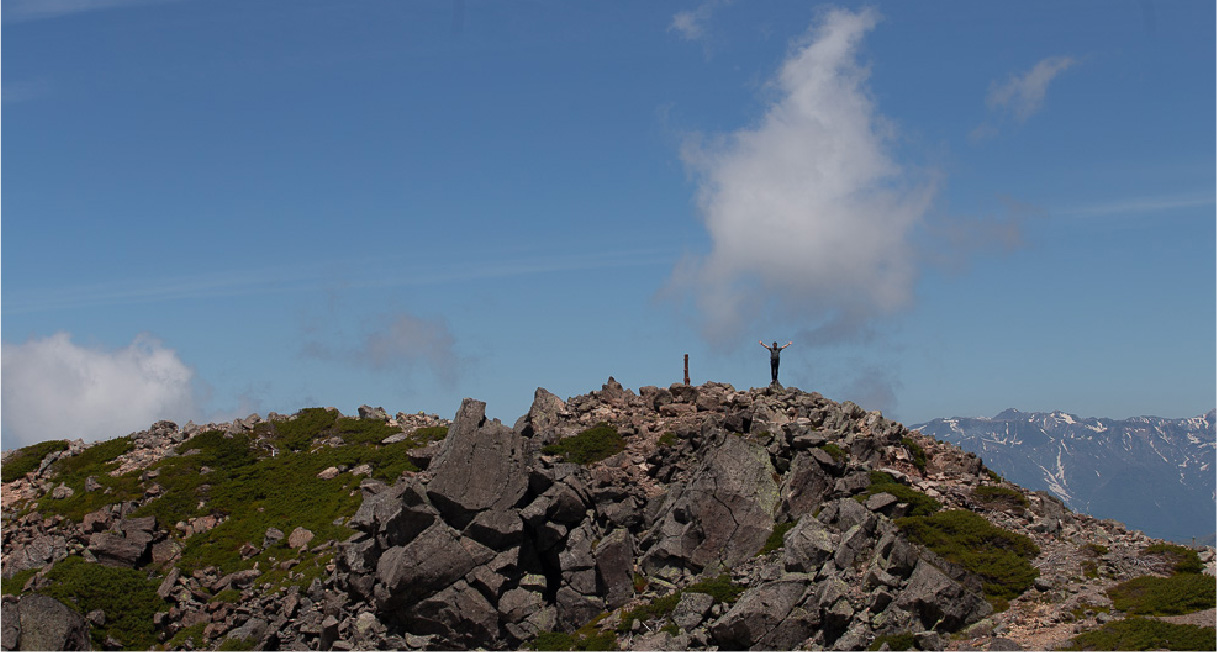 Mt. Norikura is a massive volcanic mountain that, despite its 3,026-meter height, is known as a relatively easy climb. Buses and taxis also ascend the mountain, rising through birch forest via Japan’s highest road to its highest bus stop, beyond the tree line. Lucky visitors might catch a glimpse of Japanese rock ptarmigans, alpine birds that have become beloved mountain mascots. 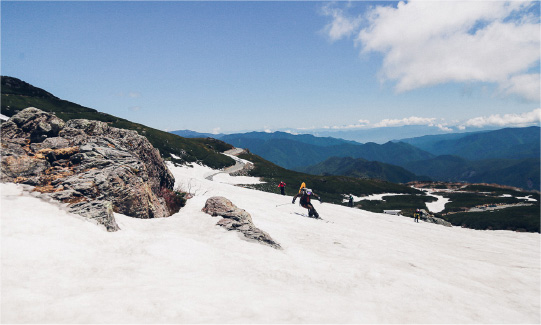 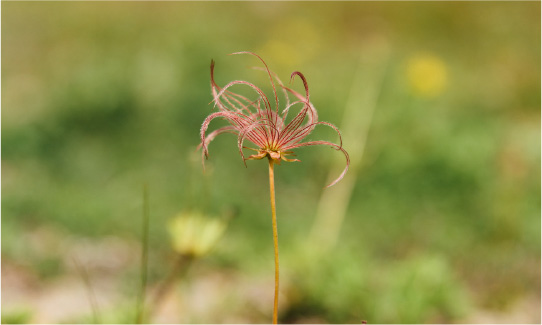 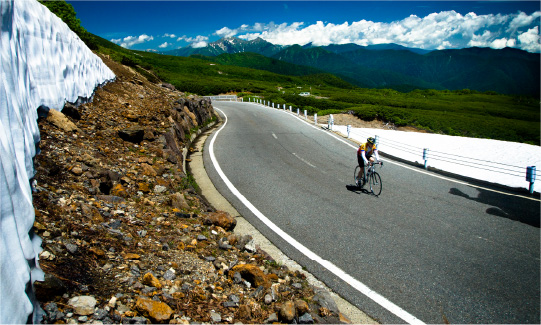 In the southwest corner of Chubusangaku National Park stands Mt. Norikura, a massive volcanic mountain that straddles the border between Gifu and Nagano prefectures. Its name means “riding saddle,” befitting the swooping shape of its peaks and plateaus.

Visitors can experience alpine altitudes and the cooler temperatures found there with a minimum of fuss and exertion. Not only is it one of the easiest summits over 3,000 meters to climb, but bus and taxi services make the ascent on the Norikura Skyline/Norikura Echo Line, Japan’s highest road. The road climbs through birch forests and beyond the tree line to the Norikura Tatamidaira bus terminal—which, at 2,702 meters, also happens to be Japan’s highest bus stop. (The restriction on private cars has gone a long way toward protecting the fragile alpine environment.)

From there, hikers can choose from among several trails of varying distances and levels of difficulty. The classic route, a three-hour round trip, leads to the very top of Mt. Kengamine, at 3,026 meters the highest peak on the mountain. But even the 15-minute hike to the top of Mt. Mao, one of Norikura’s minor peaks, offers superb views in all directions, especially of the Northern Alps. The trails pass through fields of granite boulders and dwarf Siberian pine, the habitat for the raicho, a rare, nationally protected species of rock ptarmigan. Lucky visitors might catch a glimpse of these alpine birds, descendants of a population left behind when the glaciers retreated during the last ice age. Their mating season is from late May to early June, and they change their coloration three times throughout the year, turning almost completely white in winter.

There are seven bodies of water on Mt. Norikura, many of them offering reflections of the 23 peaks that make up this range.
For visitors who wish to stay at altitude, several lodges around the bus terminal’s parking lot offer accommodation during periods when the road is open. 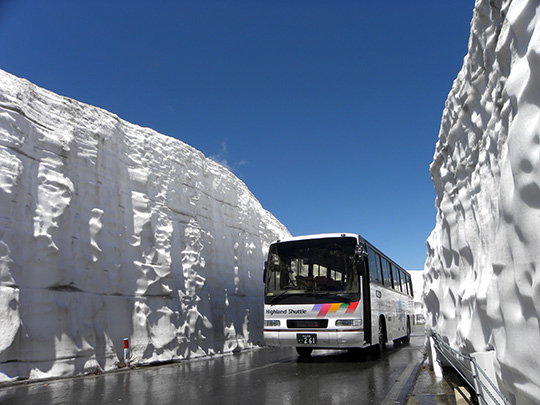 The Norikura Echo Line is the highest drivable road in Japan. This alpine highway winds its way up the Nagano Prefecture side of Mt. Norikura from Norikura Kōgen to the country’s highest-elevation bus stop (2,716 m) before reaching the terminus at Tatamidaira (2,702 m). Travelers ascending the Echo Line pass above the timberline at around 2,500 meters, and the sudden and stunning views that open up draw many visitors every year. Visitors can also enjoy the distinctive Sanbondaki and Zengorōnotaki waterfalls that lie along the route.

In order to preserve the mountain’s natural ecology, the Echo Line is closed to private motor vehicles above the Sanbondaki entrance gate. Hikers can climb the route year-round, and in summer and autumn visitors can travel it by bus, taxi, or bicycle. Buses depart from the Norikura Kōgen Tourist Information Center every day from July through October, though the service may end earlier if the weather turns severe. The buses take around 50 minutes to reach Tatamidaira.

From late April to late June, a Snow Wall Bus runs from the bus station at Norikura Kōgen Tourist Information Center (N29) to the terminus at Kuraigahara Sansō (N38). The Snow Wall Bus is so named for its route, which is carved each winter through vertical banks of snow that may reach 10 meters in height.

The Echo Line has also become a magnet for recreational cyclists. Its hairpin bends and beautiful scenery are reminiscent of those that thrill a global audience for the annual Tour de France. Since 1986 the Norikura Hill Climb, held the last weekend of August, has attracted top cyclists from across the country. The victor on this “Road to the Sky” usually takes around 54 minutes to complete the full route, which ascends 1,260 meters with an average gradient of 6.1 percent. In 2019, 4,475 people took part.

The idea to build a road to the summit of Mt. Norikura first arose on the Nagano Prefecture side of the mountain. Initial construction was aided by the Matsumoto unit of the Japan Self Defense Force, which still holds Telemark Nordic skiing practice on the mountain’s slopes. However, Gifu Prefecture completed a similar alpine road, the Norikura Skyline, in 1948—six years before the Echo Line could be finished.

Visitors to Mt. Norikura need not worry about playing favorites. The two highways meet at Tatamidaira, and it is easy to travel up one and down the other, enjoying both the Gifu and Nagano sides of this spectacular mountain. 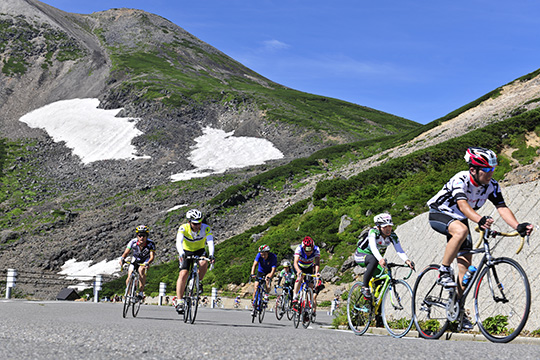 Mt. Norikura has long attracted outdoor enthusiasts with its lush woodlands, excellent vistas, and the challenge of the ascent. Climbing, hiking, and skiing each have a history on the mountain, and now Norikura is drawing a new kind of athlete: recreational cyclists.

The mountain summit is accessible by two highways—the 20.5-kilometer Norikura Echo Line on the Nagano side and the 14.4-kilometer Norikura Skyline on the Gifu side. Both roads are closed to private motor vehicles, but they have become magnets for cyclists of all ages and skill levels, from weekend hobbyists to seasoned professional racers.

Mt. Norikura rose to fame in Japan’s cycling community in 1986 with the first Norikura Hill Climb held on the Echo Line. The race’s twisting curves and spectacular scenery are reminiscent of the Tour de France’s Alps and Pyrenees courses. Held the last weekend of August, the annual race now attracts more than 4,000 participants—from elite racers who complete the course in less than an hour to amateur cyclists who simply wish to conquer the peak. Many return year after year to improve their own best times.

In 2004 the Norikura Skyline Cycle Hill Climb in Gifu was added to the regional cycling calendar. This 18.4-kilometer-long course climbs 1,342 meters and has an average gradient of 7.2 percent. It, too, attracts cyclists of all ages and abilities, some of whom even don costumes to participate. Recently the race has introduced a category for electric bikes, meaning that even less athletic participants can race to the summit—with a little electro-mechanical assistance.

Cycling in the Norikura area is not limited to the road. A growing network of mountain bike trails enables off-road exploration as well. Facilities in Norikura Kōgen offer mountain bike and electric bike rentals, lessons, and guided tours of the highlands.

The Kikyogahara Plain stretches out near the top of Mt. Norikura. Its 2,700-meter altitude makes it an excellent habitat for Siberian dwarf pine, an evergreen shrub that grows up to 5 meters high. The pines at Kikyogahara grow to around knee height. Another common name for these shrubs is “creeping pine,” as they tend to spread horizontally across a large area. These slow-growing plants can live for up to 1,000 years. 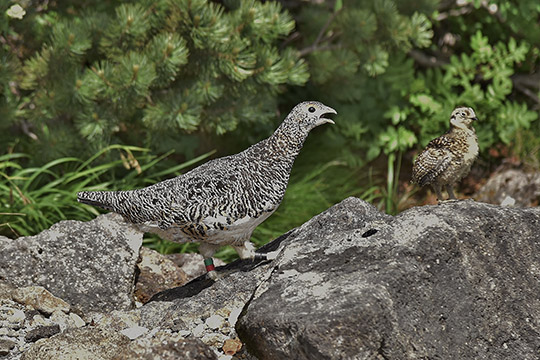 Rock ptarmigans (raicho) nest beneath the Siberian dwarf pines. This protected species is rare and elusive, but may be spotted in its natural habitat at Kikyogahara. The name raicho literally translates as “thunder bird,” and is said to be based on the bird’s affinity for living at high altitudes. The raicho is also known as the “bird of the gods,” since it lives high up where the mountain spirits are said to dwell. This medium-sized grouse molts three times per year, changing its plumage from white to brown, then black, before returning to white again for winter.

Kikyogahara is easily accessible from both Matsumoto, in Nagano Prefecture, and Takayama, in Gifu Prefecture, by either bus or taxi. A “Watch the Sunrise” bus departing from Hirayu Onsen arrives at Norikura (Tatamidaira) Bus Terminal in time for visitors to see the sunrise, along with early morning views over the Hotaka mountain range, on clear days in the summer.

THINGS TO SEE & DO IN MT. NORIKURA