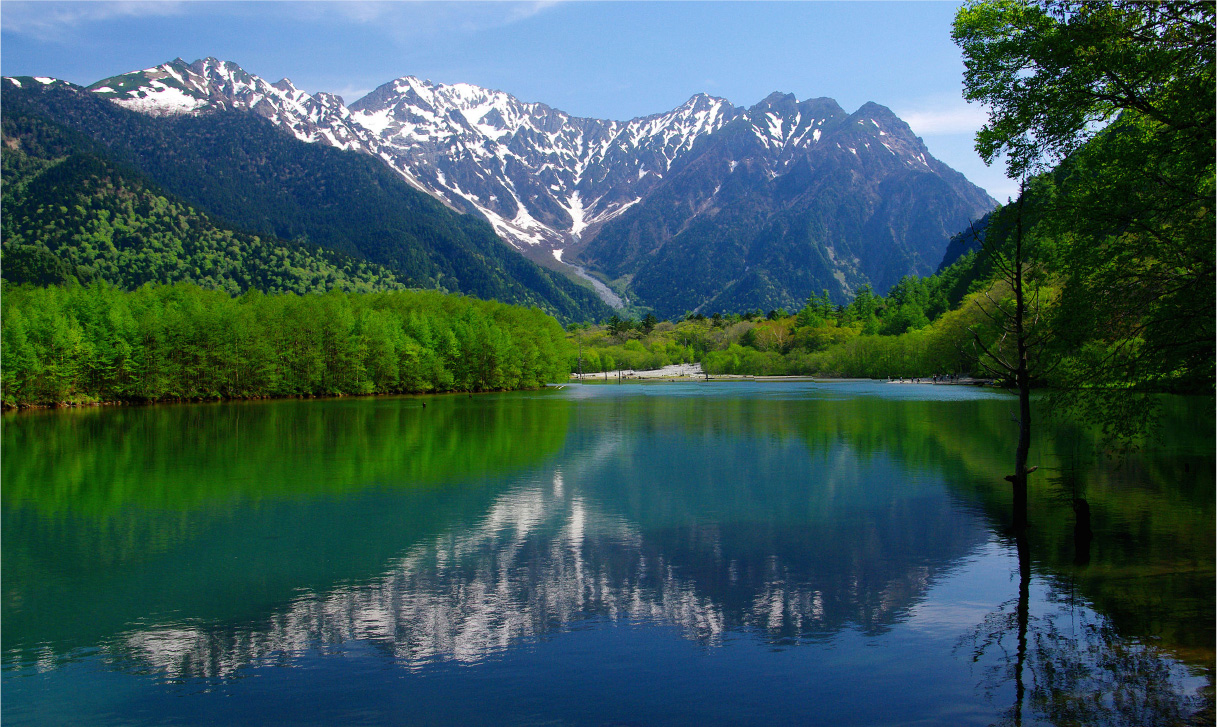 Spectacular Views of The Alps

Kamikochi is the park’s most famous scenic spot. Its beginner-friendly trails take visitors through lush forests, with views of the magnificent peaks of the Hotaka range reflected in Taisho Pond. Kamikochi is also the gateway to many of the park’s 3,000-meter-high summits, and hikers and mountaineers flock here to begin their climbs into the clouds. 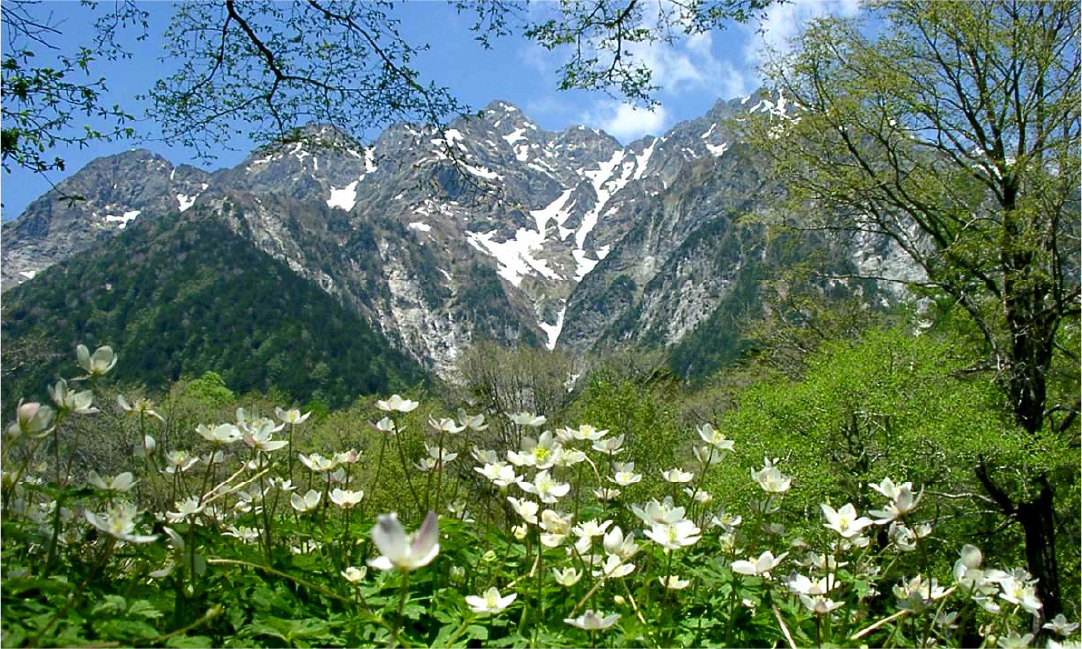 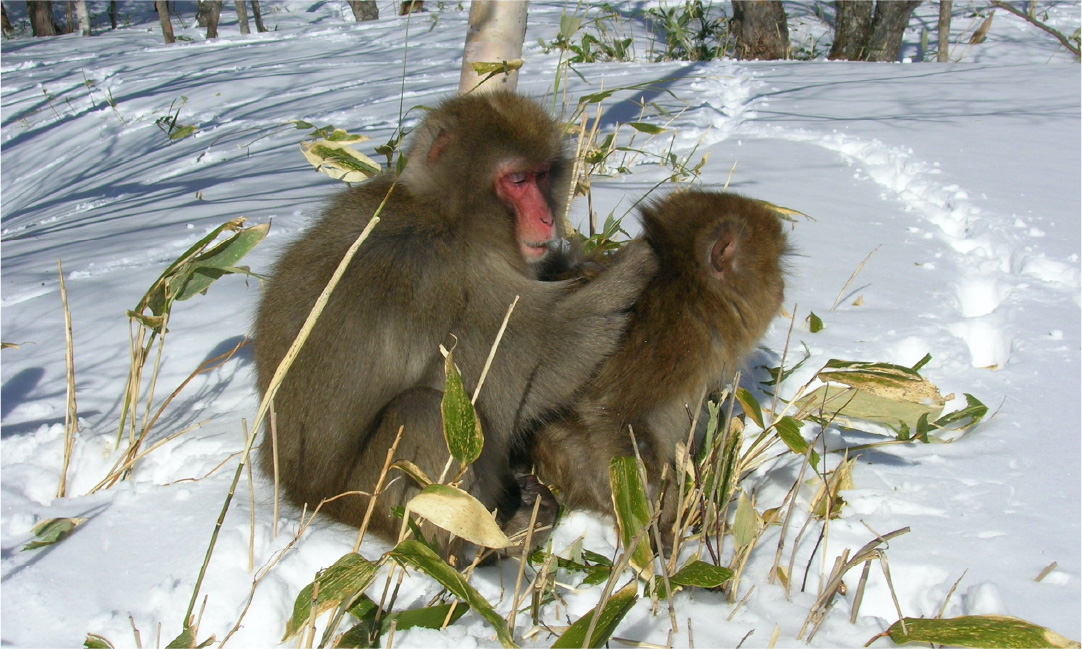 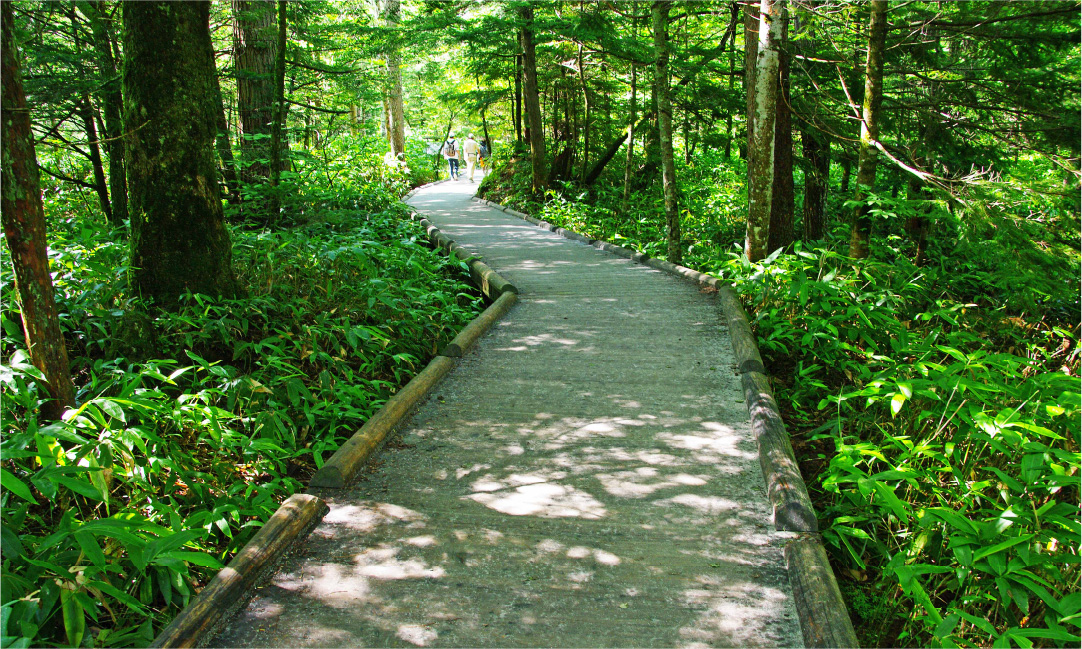 Many visitors to Kamikochi are left stunned by their first view of the valley. As you emerge from the forest, the valley entrance opens onto the sight of Mt. Yakedake’s active volcanic peak, clouds of steam rising from its bleached summit. Ahead are the calm, clear waters of Taisho Pond, formed when the mountain’s most recent eruption, in 1915, dammed the river. The scenery is magnificent in all seasons, but many locals believe that the contrast of lush green foliage, barren rock and snow-crusted valleys in early summer shows Kamikochi at its finest.

Serious hikers start their ascents to the area’s highest summits from Kamikochi. But the majority of visitors prefer to walk the gentle trails along the Azusa River, through forests of larch, elm, and a unique member of the willow family called kesho-yanagi, or “make-up willow,” for the dusting of white powder that appears on young saplings. Wildflowers, butterflies and mammals—including monkeys and black bears—can be spotted in the area, and bird watchers come from far and wide to delight in its many migratory and nonmigratory species.

A great deal of effort goes into protecting Kamikochi. Private cars have been banned from the area since 1996, and only buses and taxis are allowed beyond the tunnel that leads into the park. The number of lodging facilities—which range from elegant hotels to campsites—is restricted, so it is best to reserve accommodation well in advance.

Visitors are asked to cooperate in protecting the area’s natural beauty. Due to heavy snowfall in the winter months, transportation to Kamikochi is only available from April 17 to November 15. The peak seasons are around the beginning of May and from late July to October.

The Azusa River is a central feature of the highland valley of Kamikochi. It originates on the steep slopes of Mt. Yari (3,180 m) and flows through the valley, passing beneath the iconic Kappa Bridge. As it heads south, the river forms the scenic Taishō Pond. It gathers momentum as it plunges through the valley, then spreads out to form Lake Azusa at the Nagawado Dam.

The river is said to take its name from the azusa tree (Japanese cherry birch), which was prized for bow-making. The river basin has been a center for farming and forestry since ancient times. In addition to supplying residents with fish and drinking water, the river has supported numerous industries along its downhill course to Matsumoto. For Kamikochi, the Azusa River provided a route for floating the region’s valuable timber to city markets. It also aided the cultivation of mulberry trees, the leaves of which feed silk worms for silk production. About 15 kilometers downstream from Kamikochi, local girls operated river-powered machinery that unwound silk cocoons into useable strands, then wove them into raw silk thread. Residents claimed that drinking the pure mountain water of the Azusa gave these silk workers their fair skin. At the end of the nineteenth century, mountaineer-clergyman Walter Weston (1861–1940) wrote of the river’s crystal-clear waters and white-pebbled banks, and spoke of buying a dozen freshly caught fish from an Azusa River angler to feed his men as they climbed Mt. Yari.

Today, the river is synonymous with Kamikochi. Tourists and alpinists often pose for photographs beside its rushing waters at Kappa Bridge, the setting for Akutagawa Ryūnosuke’s satirical novella Kappa. The hotels and restaurants that line its banks offer customers views of a river that has changed little since the days of Weston’s sojourn. 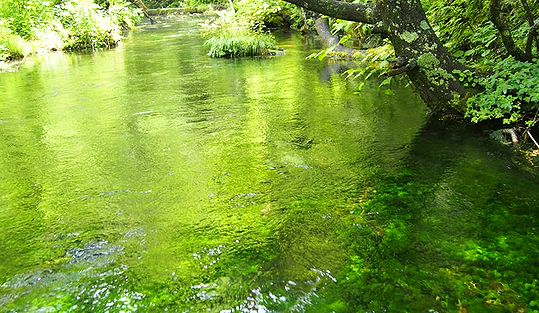 The Shimizu, a 300-meter-long tributary of the Azusa River, splits from the Azusa just upstream of the iconic Kappa Bridge. The waters of the Shimizu come from underground springs fed by rainwater that falls on Mt. Roppyaku and filters through the rock. The water temperature remains relatively constant, ranging from 4°C to 8°C year-round.

The water at the source is pure enough to be drunk directly. Hot-spring resorts and hotels in Kamikochi draw their drinking water from the Shimizu, and campers along the riverbanks often use the river’s cool waters to chill drinks and watermelon. During the summer months, the brilliant white flowers of the Japanese water buttercup (baikamo), which grows only in the cleanest water, fill the shallow river. 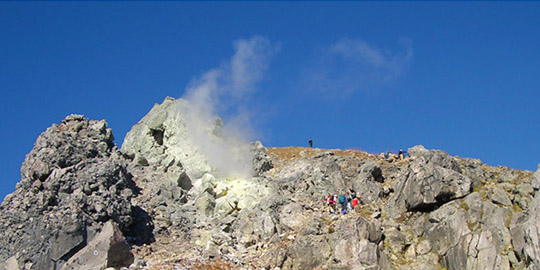 Mt. Yakedake, literally “burning mountain,” is a twin-peaked volcano close to the central Kamikochi area. It is still active and gives off plumes of steam. A major eruption in 1915 helped shape the current landscape of Kamikochi, causing a landslide which dammed the V-shaped Azusa River to create Taisho Pond. Mud and silt from the eruption is still dredged from the pond every year. Lava flows left long scars along the side of the mountain, which are still visible from below.

The north peak is relatively easy to hike despite the volcanic activity, and the return hike from Kamikochi is a particularly popular day trip. Reaching the 2,444-meter-high summit takes around four hours, with three hours needed to return. The forest at the base of the trailheads eventually gives way to rocky terrain and steam-spouting vents at higher elevations. Climbing the south peak is prohibited.

The Kama Tunnel provides the only vehicle access to the remote Kamikochi valley. The tunnel was named for the spray rising from the rapids of the nearby Azusa River, which is said to resemble steam rising from a boiling cauldron (kama).

The tunnel is frequently closed due to landslides and avalanches, although the structure is periodically improved to protect it from damage. The tunnel was first dug by manual labor in 1927, and served mainly as a transportation route for the power industry. Bus services offering visitor access began in 1933, and were expanded to include Kamikochi in 1935—an important step toward the designation of the area as a national park.

The tunnel was further improved in 1937, and remained in service until the current tunnel was opened in 2005. The tunnel is narrow and steep and also has a sharp curve partway through. An increase in traffic congestion from tourists visiting Kamikochi led to private cars being banned from using the tunnel in July and August from 1975 onward. From 1996, the ban was set year-round. Buses and taxis are allowed through for most of the year, but the tunnel is closed to all vehicles during the winter months. Anyone wishing to visit Kamikochi during this time must walk through the tunnel.

The Tokugo Pass is part of a mountain trail that runs between the Kamikochi valley and the village of Shimashima to the south. During the early 1600s, local residents used the trail for mountain access to cut and gather timber and collect medicinal herbs. The trail was one of the only ways to get to Kamikochi from Shimashima and neighboring areas, and travel along the almost 20-kilometer route was undertaken on foot.

Mountain climbing for pleasure was relatively unknown until the arrival of William Gowland (1842–1922), a British mining engineer and one of many Western experts recruited by the Japanese government to help industrialize the country. Gowland coined the term “Japanese Alps” after being guided to the peak of Mt. Yarigatake. British missionary and enthusiastic mountaineer Walter Weston (1860–1940) followed in Gowland’s footsteps, helping popularize mountaineering in Japan and introducing the Japanese Alps to the rest of the world. Both Gowland and Weston hiked over the Tokugo Pass during their time in Japan; Weston walked the Tokugo Pass trail 11 times.

Access to hiking areas was improved as recreational climbing became more popular, and a paved road to Kamikochi was completed in 1927. An old mountain lodge constructed on the trail in 1923 to accommodate hikers is still available for use today, and was registered as a Tangible Cultural Property by the Nagano Prefectural Government.

It takes about four hours to hike the Tokugo Pass trail from Kamikochi, or about eight hours from Shimashima, which is four kilometers from Shin-Shimashima railway station. The Hotaka mountain range can be viewed on the pass from an elevation of 2,135 meters.

You can help preserve Kamikochi

Over a million people visit Kamikochi each year, and we need everyone to help preserve the natural environment. Please be mindful of the following when you visit:

Like you, we think Kamikochi is a very special place. Please help us keep it that way.

THINGS TO SEE & DO IN KAMIKOCHI