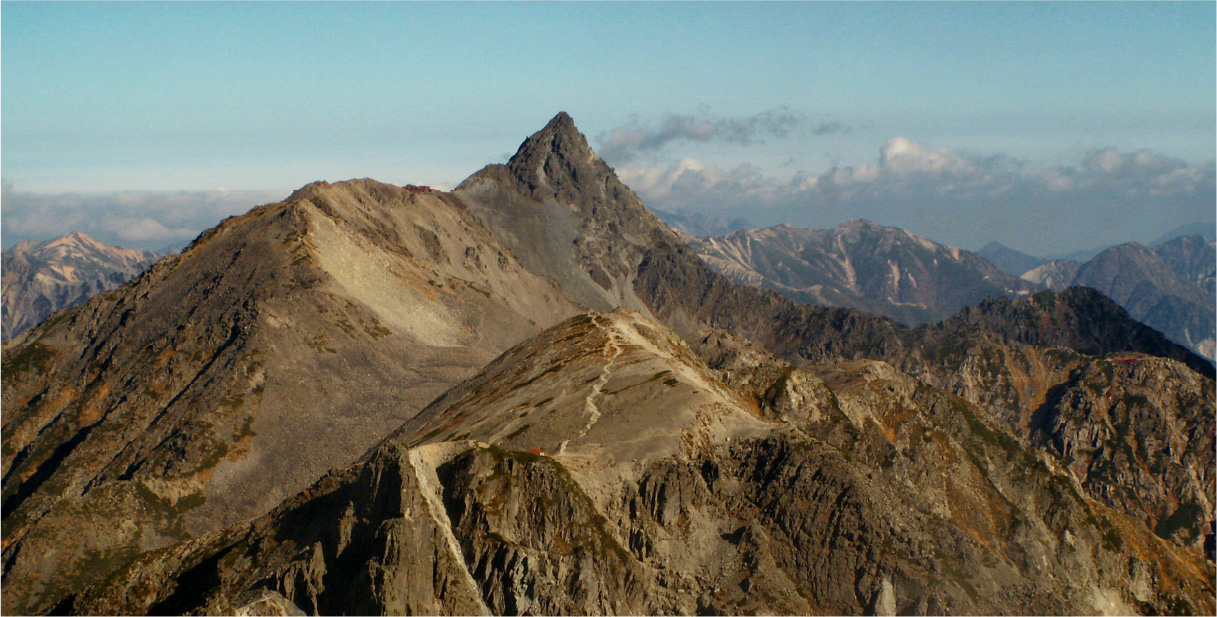 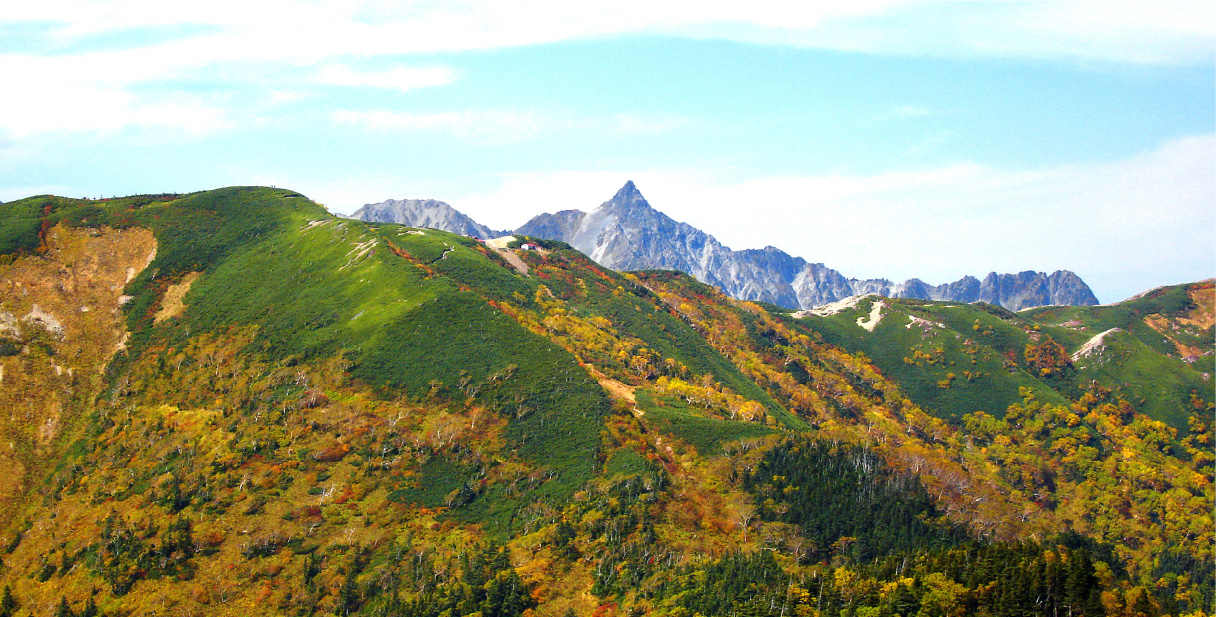 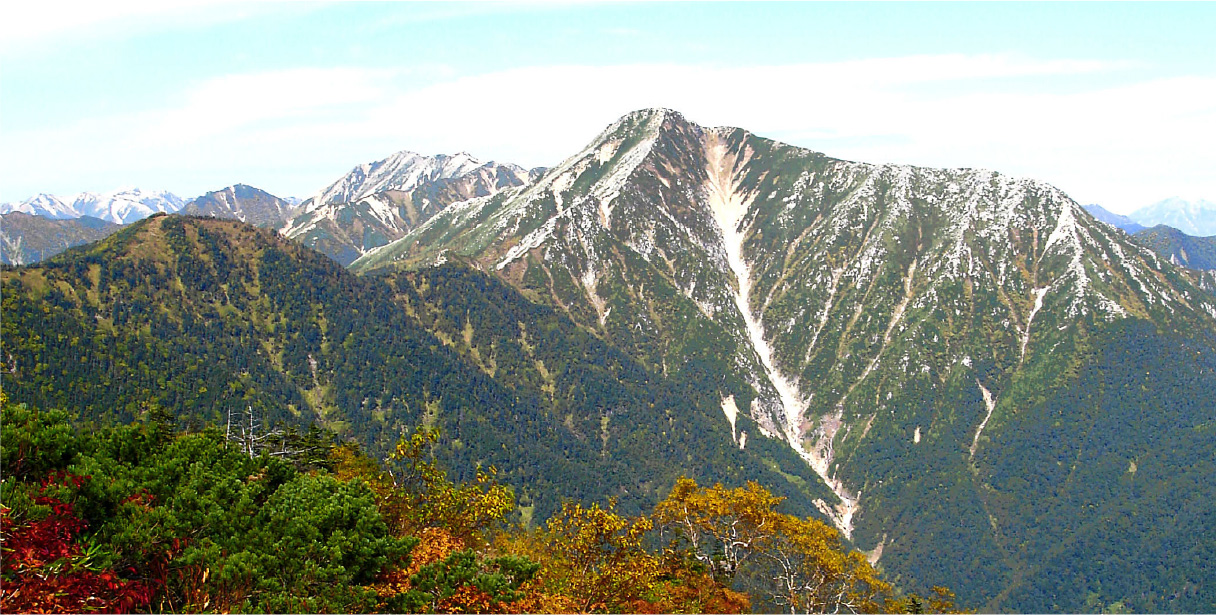 About 20 Mountain Huts, Most of Which Offer Tent Camping

Accessible from Kamikochi and Shinhotaka

The Hotaka Range includes half of Japan’s peaks over 3,000 meters. The most symbolic is Mt. Yarigatake, often called the Matterhorn of Japan for its sharply tapered peak. Climbing in the Japanese Alps began here with ascetic monks who believed in the divinity of mountains, was popularized after climbs by nineteenth-century European mountaineers, and continues to flourish with today’s legions of modern alpinists.

The mountain huts do not accept credit cards, so be sure to bring cash for payments.
ABOUT THE AREA 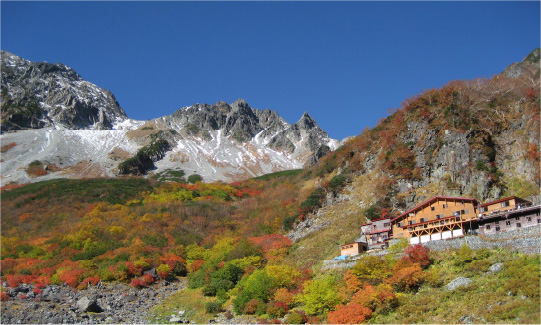 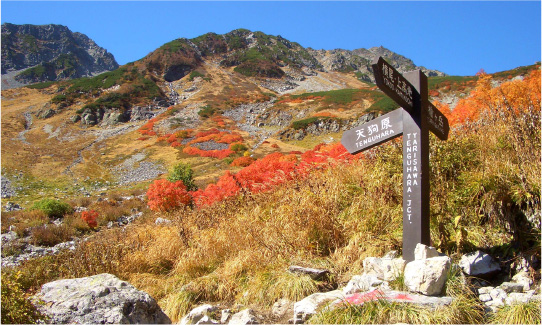 The Hotaka mountain range includes 8 of the 21 mountains in Japan with to elevations of over 3,000 meters. This is the heart of Chubusangaku National Park and home to the region’s most iconic peak, Mt. Yarigatake, which, true to its meaning in Japanese (“spear mountain”) tapers to a sharp point. Yarigatake is also called Japan’s Matterhorn for its resemblance to the well-known pyramidal peak that straddles the Swiss-Italian Alps.

The rugged makeup of these relatively young mountains is the result of a geologic upthrust of granite strata that were then carved out by glacial activity some 10,000 years ago. This left huge, U-shaped curves that can be seen on the face of Mt. Yarigatake, for example. While these mountains are not particularly tall by global standards, the varied landscapes and precipitous inclines make this range an exciting and enjoyable place for climbers of all levels to test their skills and stamina.

Besides its natural beauty, this area of the national park is also historically important, as it was the birthplace of Japanese mountaineering. It was here in the eighteenth century that an ascetic monk made the first known ascent of Mt. Yarigatake, and where a half-century later a British alpinist summited the mountain and coined the term “the Japanese Alps.” Over the next century, the sport of mountaineering developed at a rapid pace, eventually spreading to the rest of this mountainous country.

Through a system of mountain huts and well-maintained trails of varying difficulty, the peaks are now accessible to hikers keen to experience the region’s stunning views, its diverse alpine flora and fauna, and the challenge of its steeper trails. 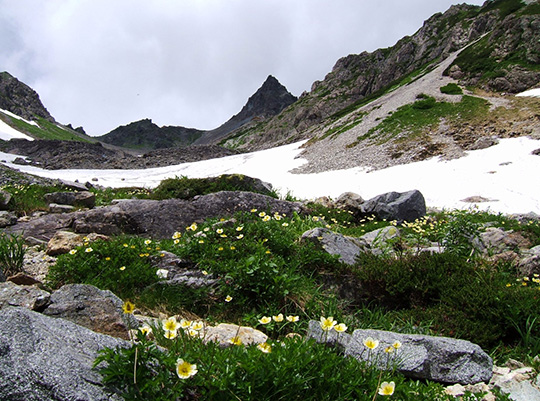 Mt. Yarigatake, with its spear-shaped peak, stands out in the Hotaka mountain range within Chubusangaku National Park. At 3,180 meters high, the mountain is the fifth highest in Japan. Another name for Mt. Yarigatake is “Japan’s Matterhorn,” due to its resemblance to the famous mountain that straddles the Swiss-Italian Alps.

The priest Banryu (1786–1840) was the first person recorded as having successfully climbed Yarigatake, in 1828. Banryu saw the mountain as a representation of the Buddhist Pure Land in this world. Stories say he spent over a month in a small cave near the summit chanting a Buddhist mantra. The first person from outside Japan to reach the summit was British mining engineer William Gowland (1842–1922), in 1878. It was he who coined the term “Japanese Alps.” Over the next half century, recreational mountain climbing developed rapidly in Japan, and “Yari,” as the mountain is affectionately known, is visited by many mountaineers each year. A number of trails of varying difficulty lead up to the peak. The most popular route is the approach from Kamikochi highland valley, which combines excellent mountain views with a relatively light climb.

Alpine flowers bloom along the mountain ridgelines in summer, and the endangered raicho (rock ptarmigan), which nests at high altitudes, may be spotted on the upper slopes. The area draws hikers and photographers seeking views from the summit, particularly on clear days.

Lodges are scattered throughout the mountains of Chubusangaku National Park, making it possible for climbers to scale Mt. Yarigatake and adjoining peaks over multiple days. The lodges on Yarigatake, many family-run, are clustered near the peak, and offer hot meals and accommodation to climbers who book in advance. Local residents help maintain the trails by cutting back foliage and replacing washed-out bridges. Dedicated efforts are made to preserve the natural beauty of the mountains, and the lodges have strict rules about trash disposal and water usage. 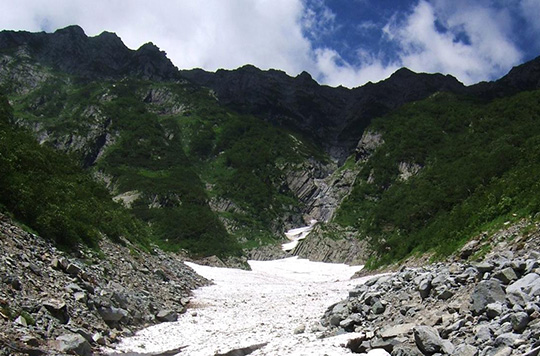 Dakesawa is a gently sloping glacial valley with marshy swampland as its base. Many photographs of the Kamikochi highland valley feature the sloping greenery of Dakesawa, visible from Kappa Bridge in Kamikochi, contrasting with the clear blue waters of the Azusa River and the white of the snow-capped mountains. The colors of the landscape mark the changing seasons, with lingering snow in the higher valleys in spring, large meadows of orange and pink mountain wildflowers in summer, and foliage in fall.

The valley includes several hiking trails, with the more gently inclined routes accessible to families and day-trippers coming from Kamikochi. The Dakesawa Goya Hut, a mountain lodge built in 2010 to accommodate hikers, stands at an elevation of 2,170 meters. It takes about three hours to hike there from Kamikochi, and the lodge generally operates between April and November, with food, beverages, and overnight accommodation available.

Kagamidaira means “mirror plain,” and the area is most likely named for the way the clear waters of its numerous ponds reflect the surrounding mountains. The largest of these ponds is appropriately called Kagami-ike (“mirror pond”). On windless days, its waters reflect the surrounding Hotaka mountain range and Mt. Yarigatake. The plain is also covered with a variety of subalpine trees such as firs, beeches, and Japanese rowans, a deciduous tree with a rounded crown and bright red, berry-like fruit. This mix of natural features has led many seasoned hikers to name Kagamidaira as the most scenic spot in the Japanese Alps.

Camping on the plain is prohibited, but overnight stays at the Kagamidaira-sanso lodge can be arranged with advance booking. Guests can enjoy the privilege of viewing the mountain in the late evening and early morning.

Kagamidaira Plain stands at 2,300 meters above sea level, and is accessible from the Koike Shindo Trail which connects Shin-Hotaka Onsen with Mt. Sugoroku. Hiking to the plain from Shin-Hotaka takes around five hours. 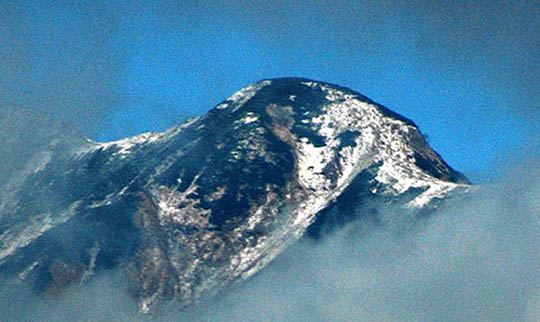 Mt. Kasagatake is on the Gifu Prefecture side of Chubusangaku National Park, and rises to 2,898 meters. Its shape resembles a conical hat called a kasa in Japanese, hence the name. The first recorded climb to the summit of the mountain was in 1683 by Enku (1632–1695), a Buddhist priest famous for carving thousands of wooden statues of the Buddha. Legend says he used these statues to comfort people he met on his many pilgrimages who were grieving, dying, or suffering from hunger or natural disasters. Some were also given in exchange for lodging.

Enku was followed years later by Banryu Shonin (1786–1840), another Buddhist priest who reached the summit of Kasagatake in 1823. British missionary Walter Weston (1860–1940) was the first person from outside Japan to make the climb, in 1894, and his ascent helped spark the beginning of recreational mountaineering in Japan.

Today, many climbers follow the Kasa-shindo Trail from Shin-Hotaka Onsen, which takes just over nine hours to the top. A lodge located directly below the summit provides food and accommodation to climbers who choose to stay overnight and descend the following day. The Kuriyadani Valley Trail also leads to the summit, but it can be difficult and should be attempted only by experienced mountaineers.

Mt. Kasagatake was formed by volcanic activity over 63 million years ago, and successive eruptions have left multiple layers of volcanic rock in its caldera. An exposed cross-section of these rock layers remains near the summit. In spring, the melting snowdrifts just below the peak can be seen from Gifu Prefecture, and farmers use their changing shape as a guide to help them determine when to begin planting rice. 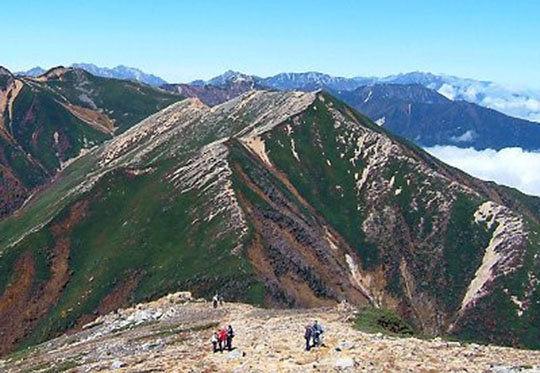 Mt. Jonen stands on the Nagano Prefecture side of Chubusangaku National Park, its sharp outline resembling a pyramid. At 2,857 meters high, Mt. Jonen may not be one of the highest peaks in the park, but it is one of the more well-known. The Japanese characters that make up the name Jonen mean “constant” and “prayer,” and many believe this was inspired by the mountain’s resemblance to the shape of a Buddhist priest sitting in prayer. The mountain is visible from both Matsumoto and Azumino on clear days, and is often photographed with Matsumoto Castle in the foreground. It is so popular in the two cities that it even features in local school songs. Farmers today carry on the ancient practice of judging when to plant their crops by the way the snow melts on the face of the mountain in spring.

A number of trails lead to the summit, and the hike is around six to seven hours. During the summer hiking season, a variety of colorful mountain flowers line the paths up the mountain. A mountain lodge offers accommodation a few hundred meters from the summit, and there are also tent spaces for campers.

THINGS TO SEE & DO IN
THE HOTAKA MOUNTAIN RANGE